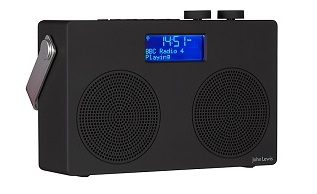 The John Lewis Spectrum Duo is an FM/DAB radio from British department store John Lewis. It’s essentially a stereo version of the Spectrum Solo, and could be a good choice if you want an affordable yet quality portable DAB radio.

The John Lewis Spectrum Duo is very easy to set up—you just turn it on and let it find the stations available in your area. It’s also very straightforward and easy to use.

You can use Bluetooth to turn the radio into a wireless speaker and stream music or other audio from your phone or tablet.

The sound quality isn’t particularly impressive, but it’s good for a radio of its size and price. It doesn’t have much bass, but the John Lewis Spectrum Duo sounds better than most other small radios.

The radio has relatively good reception on both FM and DAB, and performs better in this regard than many other portable digital radios.

The John Lewis Spectrum Duo eats through batteries quickly, and the batteries will probably run out after a week or two of regular use. However, this is a common issue with portable DAB radios since digital radios use more power than AM/FM radios.

Apart from Bluetooth this radio doesn’t have many extra features, and is somewhat unusual in that it doesn’t offer an alarm clock function.

The John Lewis Spectrum Duo performs very well for the price when it comes to radio reception and sound quality. It’s also very straightforward and easy to use.

However, this radio does have some issues with reliability, as several buyers have found that the power cable broke, or that the radio frequently froze.

Overall, the Spectrum Duo is a good budget DAB radio, though there probably are better options out there.

, which comes in a choice of 3-watt and 6-watt versions. The Philips AE5020 is a portable FM/DAB radio with an attractive wood-effect finish and three dedicated preset buttons so you can quickly access your favourite stations.

For some more options in roughly the same price range, see our roundup of the best DAB radios under £100.