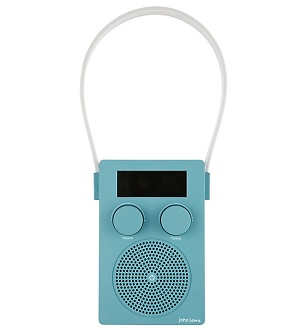 As the name suggests, the John Lewis Spectrum Shower Radio is a radio for using in the shower. It’s designed to be water resistant and has a carrying handle which could be used for hanging the radio up in the shower.

The John Lewis Spectrum Shower Radio looks great in the bathroom and is available in either Azure or White. It looks classy even if the build quality isn’t as high as it could be.

One of the best things about this radio is that it offers strong reception, even in the shower. While this radio is designed for using in the shower, there’s no reason why you can’t use it elsewhere in the house, especially since it’s so light and easy to carry.

John Lewis state that the internal battery can last for up to 12 hours, which isn’t bad for a digital radio (digital radios typically get through batteries quicker than FM radios).

The radio is generally very easy to use. However, the on/off switch is tricky to use, and requires you to hold the radio with both hands and apply some force. It would be better if the radio had a simple on/off switch.

This radio has all the essential features you’d need in a shower radio, but it could be improved with a few extra functions. It would be nice to have an alarm and timer, and adding Bluetooth would really set the radio apart.

Overall, the John Lewis Spectrum Shower Radio is a very well designed shower radio. It has an attractive minimalistic design and offers strong reception, clear sound and is also water resistant so you can use it in the shower without worrying about getting it wet.

The biggest issue with this radio is it’s poorly designed on/off switch, which is awkward to use. However, this doesn’t detract too much from the overall experience of using this radio.

One of the most popular DAB shower radios in the UK is the Sony ICF-S80 Splash Proof Shower Radio. Like the John Lewis radio reviewed here, the Sony ICF-S80 has a carrying handle and is water resistant. One drawback with the Sony ICF-S80 is that it only offers AM/FM radio, not DAB, though this does mean that it has better battery life.

Another alternative is the Roberts Splash, which doesn’t have as stylish a design as the John Lewis Spectrum Shower Radio, but is well made and offers reliable reception. It offers FM/DAB radio and comes with a fixing bracket for attaching it to a shower or bathroom wall.

For some more ideas, see this article: Best Shower Radios.