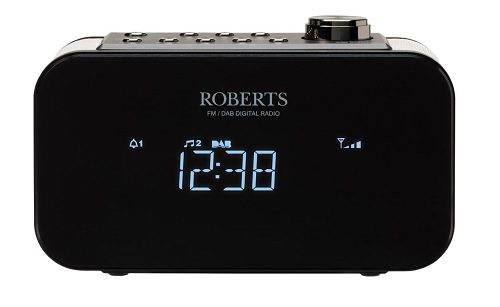 The Ortus 2 is a clock radio from respected British radio manufacturer Roberts. It offers FM, DAB and DAB+ radio in addition to two alarms and has an elegant design that’s available in either black or white. Find out more about what the Ortus 2 can do and how it performs in this review…

Lots of digital radios have an alarm clock added almost as an afterthought. The Ortus 2 isn’t like this—it’s designed as a clock radio first and has lots of clever features that make it a great clock radio.

One such feature is “any-button snooze”, which means you can pause the alarm by pressing any button rather than having to find a particular snooze button or, even worse, having to press several buttons to activate the snooze.

Another great thing about this clock radio is that the display can be dimmed completely so it won’t keep you awake at night. There’s also a “night-time display” feature that lets you see the clock for 10 seconds before it fades back to black. This is very useful if you want to see the time at night. However, the clock display is quite small and some people will find it hard to read without glasses on.

There’s also a sleep timer that gradually fades the radio out as it approaches the end of the timer so you won’t be woken up by the radio suddenly switching off.

You can set the alarm to use either an alarm buzzer sound or a radio station. The alarm works very well once it’s set, but setting it is quite fiddly and takes a lot of steps. The manual (available here) is helpful, but setting the alarm seems overcomplicated and will take a bit of practice. You get a lot of control over the alarm, but it would be good if Roberts had offered a simpler and quicker way of setting and changing the alarm.

Like many other clock radios on the market at the moment, the Ortus 2 has a USB socket which you can use to charge a phone or other device such as an iPod or Kindle.

The Ortus 2 feels well-made and has very sound quality is good for a small clock radio, as you’d expect from Roberts. The reception on DAB seems to be stronger than average.

This radio lets you save 10 preset stations on FM and 10 on DAB/DAB+. There are 3 dedicated preset buttons on the top of the radio which make it easy to change between your favourite stations without having to go through a complicated menu or scroll through the stations.

The Ortus 2 is a well-made clock radio that gives you a lot of control over the alarm. This level of control makes it more complicated than many other clock radios. For those looking for a very simple and easy to use clock radio, the Ortus 2 might be too fiddly, but if you’d like something more customisable it’s a good choice.

The Ortus 2 has very good sound quality for a clock radio and has some really clever features such as any-button snooze and a sleep timer that fades the radio out. It’s a great radio overall but be aware that many people find it somewhat overcomplicated.

One of the Ortus 2’s main rivals is the Pure Siesta S2 from British brand Pure. It’s simpler and less expensive than the Ortus 2 but doesn’t have as good sound quality.

One very popular and affordable alternative is the AZATOM Horizon. It’s available at about half the price of the Ortus 2 (at the time of writing) and has the added feature of Bluetooth. Unfortunately though, the AZATOM Horizon is also quite fiddly to use.

If you want something that’s very easy to use and aren’t interested in added features, you might want to consider the Roberts Chronoplus2. It only has AM/FM radio, not DAB/DAB+, but it’s easier to set the alarm than on most DAB clock radios.

For some more options to consider, see our roundup of the best clock radios.