Choosing a radio to take with you camping is quite different to choosing one for the home. You can’t rely on mains power, so you need something with very good battery life or the ability to be powered by solar power or winding a handle. You also want something small and light that won’t take up much space in your backpack.

We’ve researched the market and picked out five of the best camping radios available in the UK in 2019.

The Duronic Apex is a compact AM/FM radio with lots of features that make it ideal for camping.

The Apex has a built-in rechargeable battery that you can charge in several ways: winding the hand crank, using the solar panel on the top of the radio, or with a USB cable. This means you don’t need to worry about it running out of power as you can simply wind the handle or leave it in the sun to recharge.

As well as being able to listen to the radio, you can also use the Apex as a torch, which could be incredibly useful when camping.

Unlike many wind-up radios, the Apex also features an alarm clock which could be useful if you need to leave the campsite early. Instead of having an alarm buzzer sound, the Apex simply uses the radio at a high volume, which isn’t always ideal. You’ll need to make sure it has plenty of charge when using the alarm.

According to the manufacturer, the Apex should give 9 hours of radio play time or 6 hours of torch use on a full charge. If your phone dies while camping and you don’t have any other way of charging it, you can use the USB socket on the Duronic Apex, though fully charging a phone would take a long time.

Like the Duronic Apex reviewed above, the Degen DE13 is a small radio that can be powered in a number of ways. The DE13 has a hand crank and a solar panel and can also be powered by a USB cable or with 3 AAA batteries.

The Degen DE13 picks up AM, FM and shortwave radio stations. It has lots of features that make it a good choice for camping including a torch, an alarm siren and the ability to charge a phone using the USB connection.

Unlike the Duronic Apex, the Degen DE13 doesn’t have an alarm clock function. However, it does have a few features that the Apex doesn’t have: shortwave radio, an alarm siren and the option of powering it using AAA batteries.

The Hybrid is another wind-up solar radio from Duronic. It has similar features and a similar price to the Duronic Apex reviewed above, but there are a few important differences.

The Hybrid is slightly smaller and lighter than the Apex. It also has fewer features—the Apex has a torch and an alarm clock whereas the Hybrid does not.

The Apex also has a digital display which displays the radio station when the radio is switched on and the time when it’s not, whereas the Hybrid doesn’t have a clock and uses an analogue tuning dial.

The Duronic Hybrid could be a good choice if you want a simple AM/FM camping radio that you can use without batteries and don’t need the extra features offered by the Duronic Apex.

DAB radios aren’t as well suited to camping as AM/FM radios as they tend to have a shorter battery life. There also aren’t many solar DAB radios on the market, and none that can be charged by winding a handle (at the time of writing). However, if you want to take a DAB radio camping, the Roberts solarDAB 2 could be a good choice.

As the name implies, the Roberts solarDAB 2 features a solar panel. The solar panel will charge three AA rechargeable batteries inside the radio when it’s placed in direct sunlight.

Depending on how much you use the radio and how sunny it is, you might need to replace the batteries while you’re camping, but it will extend their life at the very least. Batteries aren’t included with the radio, so you will need to buy at least three rechargeable AA batteries to use with it.

The solar level and battery level are indicated using LED lights, so you know when the batteries are about the run out and when they are recharging. You can also plug this radio into the mains rather than using batteries, which could be more convenient when using the radio at home.

The Roberts solarDAB 2 is bigger than the wind-up radios reviewed above and doesn’t have any extra camping-specific features such as a flashlight. However, it’s one of the most suitable DAB radios for camping since it has a solar panel.

The Roberts R9993 is a simple and affordable AM/FM radio. It’s not designed especially for camping or listening to outside, but it’s small and functional with good battery life.

The Roberts R9993 has a 3-band radio tuner (LW/MW/FM), a headphone jack and a carrying strap. It takes four AA batteries which will last for up to 80 hours according to Roberts. It doesn’t have a solar panel or hand crank for recharging batteries, but with such long battery life it should last long enough for most camping trips. The R9993 has an LED battery indicator so you have some warning when the batteries are running low.

If you just want a simple small AM/FM radio to take camping and aren’t interested in extra features such as flashlights and alarms, the Roberts R9993 is a good choice.

Best Radio for a Caravan 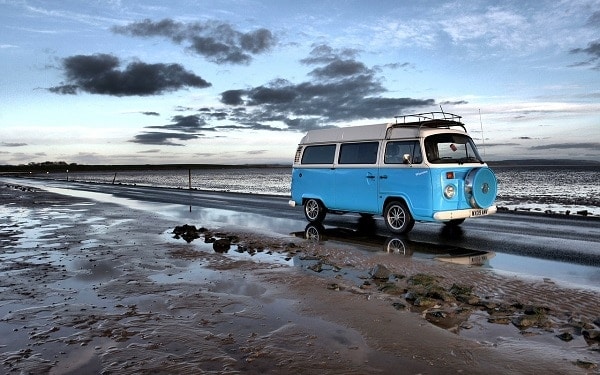 Caravanning is quite different to camping in a tent. In a caravan or campervan, you have access to a power source, so you don’t need to use solar power or a manual hand crank.

One good radio for a caravan or campervan is the Majority Little Shelford (shown below), which can be powered via a micro USB cable. This means you can use a regular phone charger to power it or charge the internal battery.

This radio picks up DAB stations and also has Bluetooth, so you can stream music from your phone. It’s small, portable and looks cool, so it’s a great choice for camping.

AM/FM vs. DAB Radios for Camping

Except for the Roberts solarDAB 2 Digital Solar Radio, all of the radios reviewed here are AM/FM rather than DAB radios.

Even though DAB radios are now more popular than AM/FM radios in the UK, there still aren’t many DAB radios that are suitable for camping. Radios with solar charging or hand cranks tend to only have AM and FM bands, not DAB. DAB radios also use more power, so batteries don’t last very long in them (usually less than 12 hours).

What to Look for in a Camping Radio

Here are a few things you might want to look for in a camping radio:

Powering a Radio While Camping

One of the most important things to consider when choosing a radio for camping is how you will charge it. Here’s an overview of the different possibilities:

If we had to recommend just one of these radios for camping, it would be the Duronic Apex.

It performs well as a basic AM/FM radio and has lots of features that make it ideal for camping. There are lots of ways to charge it, and the addition of an alarm clock and torch make it a versatile gadget to have in your backpack.

For some more options, see our reviews of the best solar radios and the best wind-up radios.