There are lots of reasons why you might want a water-resistant radio. Perhaps you want to listen in the garden, in the shower, in the shed, by the pool or while working outside. You might even want to listen to the radio underwater while swimming.

While there aren’t many fully waterproof radios on the market, there are lots of quality water-resistant products available. Here’s a roundup of some of the best options available in the UK. 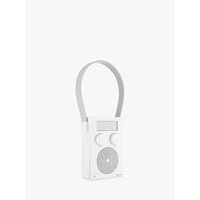 The John Lewis Spectrum Shower Radio is designed for use in the shower but could also be a good choice for listening to in the garden or humid workplaces. Unlike most water-resistant radios, it offers DAB radio in addition to FM.

One of the best things about the Spectrum Shower Radio is that it has a built-in rechargeable battery, which is more convenient than having to replace batteries or recharge them separately. However, the battery will only last 12 hours or so before needing to be recharged.

This radio is sleek and stylish and has a useful hanging strap that you can use to hang it up in the bathroom. It feels quite robust, and is backed by John Lewis’s 2-year warranty should anything happen.

The Majority Eversden has a slightly better water resistance rating than many shower radios (IPX5 rather than IPX4). This means that it can resist a sustained, low-pressure jet of water, though it isn’t fully waterproof so you can’t submerge it in water.

The Eversden has a very similar design to the John Lewis Spectrum Shower Radio, with a hanging strap and a built-in rechargeable battery.

One of the best things about this radio is that it has Bluetooth, so you can stream music, podcasts or online radio from your phone without worrying about getting it wet.

There’s even an alarm clock so you can use it as a bedside radio as well.

The POPyourShower Shower Radio has an IPX4 water resistance rating, so it’s fine for using in the shower and shouldn’t get damaged by the odd rain shower if you’re listening outside.

This radio is very reasonably priced and is one of the cheapest water-resistant DAB radios on the market. It doesn’t have any advanced features like Bluetooth, but it gets the job done if you just want a straightforward radio.

The Makita DMR108 is designed for use on building sites and other workplaces where something tough and weatherproof is needed. It has an IP rating of IP64 which means it’s both dust- and water-resistant, which is useful if you’re using on a construction site.

This radio is relatively pricey, but it’s very rugged. The Makita DMR108 is an AM/FM radio with no DAB receiver, but it does have Bluetooth so you can connect your smartphone and use it as a wireless speaker.

Some extra features include the ability to save 10 preset stations (5 on AM and 5 on FM) and a USB port for charging a phone.

The VICTORSTAR S602 is actually a wireless speaker, but it does have a built-in FM radio receiver. It also has Bluetooth, which means you can connect your device and listen to your own playlists or your favourite radio apps. If connected to your phone, you can actually answer calls while in the shower!

This speaker-cum-radio is powered by its lithium rechargeable battery, which will give you up to 10 hours of play-time (1500 hours on standby) when fully charged.

This radio-speaker is compact and light, measuring just 9.5 x 9.5 x 5.5 cm and weighing 127 g. There’s a convenient suction cup for sticking it up on the tiles in your shower.

This product may seem a little pricey for a shower speaker, but with Bluetooth and FM radio, it has some good features which are perfect for adding a soundtrack to your morning routine.

Having a shower speaker with Bluetooth means that you can listen to whatever you want safely while in the shower or bath. These water resistant speakers connect to any Bluetooth enabled device from which you can play radio apps, Spotify, podcasts, have a chat with your mum… whatever you like really. Here are a few shower speakers which may tickle your fancy and might suit your budget a little more: 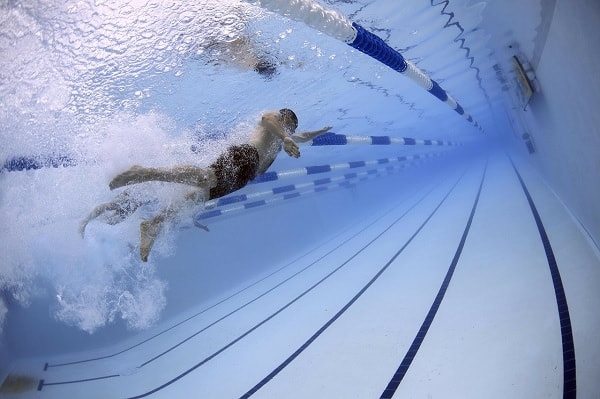 Can you get a DAB swimming radio?

We couldn’t find any underwater DAB swimming radios available when researching this article in October 2020. Most swimming radios are designed primarily as MP3 players with FM radio added as an extra, so the radio feature isn’t prioritised. If you like a bit of chatter in between your music, then perhaps finding a good music-based podcast would be a good option to download onto your MP3 device.

When researching water-resistant radios one of the first things you will notice is that they have an IP rating (also known as an IP code or International Protection Marking).

The higher the numbers, the more protection. If there isn’t enough data to assign a protection level, the digit is replaced by the letter X.

Water-resistant normally only have a water resistance rating, not a dust-proof rating, so they will have an X instead of a number for solid particle protection. Common IP ratings for radios include the following:

Which of these radios is best for you will depend on what you’re looking for in a water-resistant radio.

The John Lewis Spectrum Shower Radio offers good value for money if you want something with DAB radio capabilities. This radio would also be good for listening to in the garden since you can leave it out in a light rain shower without damaging it.

If you need something more rugged, the Makita DMR108

is a good option. It’s designed for worksites and is dust- as well as water-resistant.

It’s important to realise that very few radios are actually waterproof—most of the radios reviewed here are merely water-resistant, and shouldn’t be submerged in water or exposed to excessive amounts of water.

The swimming radios mentioned above can be submerged in water, but they don’t function as well as the less waterproof options reviewed here.