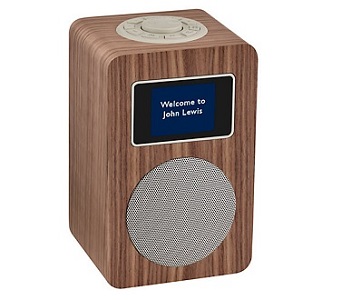 The John Lewis Aria is a compact digital radio with an attractive minimalistic design. The radio is available in a choice of three smooth wood finishes: black ash, walnut and light oak.

This radio is exclusive to John Lewis and comes with a 2-year guarantee. Find out how more about what the Aria can do and how it performs in this review…

With its small 11.8 x 11.8 cm footprint and two independent alarms, the Aria makes a good choice for a bedside radio. The Aria lets you set two independent alarms, which is useful if you like to wake up at a different time on weekdays to weekends, for example. You can set the alarms to use a buzzer sound or a radio station of your choice.

The display brightness can be adjusted so it shouldn’t keep you awake at night. However, you have to adjust the display manually which can be inconvenient. It might be better if the Aria could automatically dim itself at night and then make the display brighter during the daytime. Many other clock radios such as the Pure Siesta Rise have an auto-dimming display.

The Aria’s buttons are all on the top of the unit, with a large round ‘Snooze’ button surrounded by the other buttons. The large snooze button is easy to find when you’ve just woken up. There are also 4 handy buttons for accessing your favourite 4 preset stations, so you don’t need to scroll through a menu to change the station.

While it’s easy to set the first few presets, it can be fiddly to set preset stations after the 3rd station as the process becomes more complicated from then on. The instructions aren’t very clear about how to set presets 4-10.

John Lewis state that the casing is made from real wood, though it doesn’t feel especially durable and looks a bit plasticky.

The Aria works well with Bluetooth, and it’s quick and easy to pair it with a phone so you can stream music from your phone through the radio speaker.

For a small radio, the John Lewis Aria has very good sound quality. It’s not especially detailed or loud, but it’s more than adequate as a bedside radio. The reception is also relatively strong on both DAB and FM.

Overall, the John Lewis Aria is a great bedside radio. It has a nice design, good sound quality, strong radio reception and is easy to use with Bluetooth. However, it can be fiddly to use, especially when it comes to setting the preset stations. If you only listen to one or two stations this shouldn’t be a problem, but many users have found setting the presets to be frustrating.

The Aria is relatively expensive given its size and features, and there are cheaper radios out there with similar specs. However, it has a very attractive design and is backed by a 2-year warranty, so it might be a good investment.

John Lewis have quite a large range of own-brand digital radios, some of which are quite similar to the Aria.

The John Lewis Spectrum Solo is a similar shape to the Aria, but a bit smaller. It also has a more modern-looking plastic finish and is cheaper than the Aria. The Spectrum Solo is a portable radio that can be battery powered. It doesn’t have an alarm clock, but it could be a good alternative to the Aria if you want something small, light, portable and inexpensive.

One radio with a similar design to the Aria is the Pure Evoke H3, which also has a wood finish. The Evoke H3 has almost exactly the same dimensions as the Aria and a very similar list of features. There isn’t much to distinguish the two, though the Evoke H3 is more expensive, can be used with a battery pack and lets you save more preset stations.

If you want something cheaper, you should consider something like the AZATOM Horizon, which is a digital clock radio with Bluetooth and a USB charger. The Horizon only costs a fraction of what the Aria does, so if you want something functional and cheap it’s a good choice.